Review: We Need to Talk About Kevin 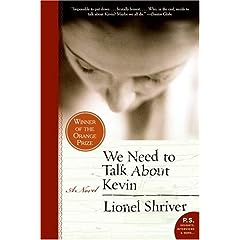 The harrowing story of a school shooting told from the perspective of the mother of the perpetrator. Through a series of letters to her estranged husband, we learn that Eva never really wanted children when she had Kevin and he challenged her every step of his childhood. Kevin was a difficult child who grew into an angry and disturbed teenager who eventually plans and executes the murder of his teacher and several classmates.
We Need to Talk About Kevin is a haunting story that I find myself thinking about even months after finishing the book. Although I enjoyed We Need to Talk About Kevin, I really struggled with this book. I had a hard time believing that a child can be evil from birth. And I am still not sure of Eva's role in the whole thing...nature vs nurture is almost a judgment call that I am not willing to make.
A couple of years back, I was able to take some Threat Assessment training with Kevin Cameron. The first "credo", if you will, is "No one ever snaps," there are always warning signs, it is just whether we see, or are willing to see the signs and act upon them. Kevin had many classic signs of a student who was either a risk to himself or others and yet there seems that there was little intervention, of course the timing of the incident in the book being before Columbine, Taber and numerous other incidents since is likely why.
This is a fascinating and powerful book. I had never stopped to think about the parents of a child who murders. I found myself questioning the tone of Eva's recollections simply because she was looking through a "hindsight is 20/20" lens and Kevin's actions would taint any one's recollections of the past.
Posted by Tara at 2:30 PM

Very good review! This book left me wanting to talk to someone about it RIGHT NOW when I finished it! It has haunted me. I reviewed it a long while ago and got lots of great comments.. let me go find the link.. be right back..

HOpe that link works, but if not, come on over and go to the Book Reviews tab. THey are listed alphabetically. I got tons of great comments so it's worth a look!