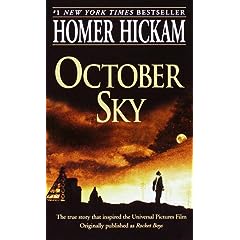 October Sky is Homer Hickam's memoir about growing up in a small dying mining town while trying to escape the cyclical life was really good. I have used the movie several times with my students as a media unit and I was not disappointed at all by the book.
Homer "Sonny" Hickam Jr. watched Sputnik I fly over the small mining town of Coalwood, West Virginia in 1957 inspiring him to begin to build his own rocket. He recruits his buddies from high school; Sonny, Sherman, O'Dell, Roy Lee and Quentin form the Big Creek Missile Agency (BCMA) hoping to join the Space Race, escape the town of Coalwood and go to college.
The BCMA persevere through exploding rockets, destruction of Coalwood Mine property, lack of funds and knowledge to build rockets, and naysayers. They are helped and encouraged by the entire town from employees of the mine who help out after hours by welding nozzles, or leaving scrap wood out for the boys to build shelters to Ms Riley the boys' Physics teacher who provides books for research, opportunity and many words of wisdom, to the people of Coalwood who congregate at Camp Coalwood to watch the numerous launches of the Rocket Boys. Sonny's parents, Homer and Elsie Hickam, both provide their own source of encouragement; Sonny's mother urges him to pursue his dreams and no matter what the insistence not to enter the mines. Sonny's father is an obstacle which challenges Sonny to work harder, be creative and use his gift of persuasion in pursuing his dreams of getting out of Coalwood and eventually getting to work with Von Braun at Cape Canaveral.
I truly enjoyed this book, I have seen the movie several times (as part of a media study with various classes I have taught) and the book added so much depth to my understanding. Hickam gives the reader a glimpse of life in a small, dying mining town and the desperation of some to escape while others are desperate to hold on to all they have ever known. I appreciated that Hickam included failures as well as successes in his pursuit, it made the story all the more interesting for me. A great story with amazing characters!
Posted by Tara at 2:30 PM