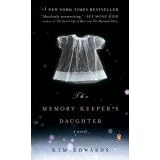 The Memory Keeper's Daughter came highly recommended to me by friends and readers who I trust explicitly, especially when it comes to good books. Which is why I was so surprised when I really didn't take to the book.

During a horrible winter storm, orthopedic surgeon Dr. David Henry is forced to deliver his own twins. The first child, his son, was born healthy. While his daughter had Down's Syndrome. Recognizing the difficulties the his daughter would encounter throughout her life, David Henry gives her to the nurse assisting and in order to take the child to a home for disabled children. Then David explains to his wife, Norah, that her daughter died.

The Memory Keeper's Daughter is a story about living with deceit. It explores how David Henry's lie affected him, his wife and son, and Caroline Gill who disappeared with the infant put into her care.

I had a hard time with this book, especially with the character of Norah. In all fairness I have never been in her situation, but I couldn't understand the level of her loss when she had Paul who needed her. Considering that the birth of the twins took place in 1964, David Henry's choice to send his daughter away made sense in some ways to me. Not necessarily the choice I would hope to make, but in context of the time I could see why he felt the way he did. In all, it was a good book I especially liked the character of Caroline Gill and her determination to give Pheobe the best life possible.
Posted by Tara at 2:28 PM