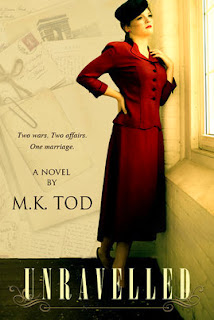 UNRAVELLED by M.K. Tod
Two wars. Two affairs. One marriage. Set at the intersection of love and war, Unravelled delivers a page-turning mixture of emotion and sacrifice.

Edward Jamieson survived his duty in World War I as a signaller. Returning to life in Canada, eventually he meets and falls in love with Ann Winston. They marry and have two children, life is good until 1935 when they receive an invitation to attend the Vimy war memorial ceremony in France. Edward is uncertain about returning to the memories of the loss of war, and the memories of Helene Noisette, the love who got away.

What ensues is a series of decisions that put their marriage in peril. Ann and Edward work to put their marriage back together as Hitler sets the stage for the Second World War. WWII sees Edward enlist with a top secret spy training, which once again forces him to keep secrets from Ann. In turn, Ann volunteers as a counselor for grieving women. The stress and agony of war wage once again on Edward and Ann's marriage.

As the title suggests, stories unravel on the stage of the world wars. M.K. Tod creates a narrative that presents an honest look at marriage after adultery. It is a fantastic mix of fiction supported by research and nonfiction. What drew me to the story was an incredible balance of graphic detail and humanity.

If you would like an opportunity to read Unravelled by M.K. Tod, enter to win below.

M.K. Tod writes historical fiction and blogs about all aspects of the genre at A Writer of History. Her debut novel, UNRAVELLED: Two wars. Two affairs. One marriage. is available in paperback and e-book formats from Amazon (US, Canada and elsewhere), Nook, Kobo, Google Play and iTunes. Mary can be contacted on
Twitter: @MKTodAuthor, Facebook, and Goodreads.

A book launch event for UNRAVELLED will be held on October 8, 2013 starting at 7 p.m. at the Duke of York at 39 Prince Arthur Avenue in Toronto, Canada.
Read Chapters One and Two of UNRAVELLED and visit A Writer Of History for more information.
CONNECT WITH M.K. TOD
Blog: A Writer Of History
Facebook Page: M.K. Tod Author
Twitter: @MKTodAuthor
GoodReads: M.K. Tod
Posted by Tara at 11:41 PM

Hi Tara ... I'm so pleased that you liked Unravelled. Many thanks for hosting me.

I love historical fiction stories and this has characters and places I can relate to.

I love books written during wartime - they are so moving!

I want to read this book because I enjoyed romantic intrigue and the historical aspect is interesting too.