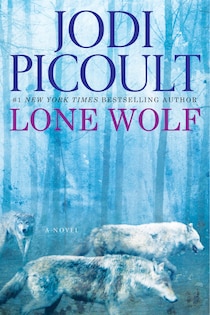 Luke Warren picks Cara, his daughter, up from a party one night when they are in a severe car accident. Cara recovers after surgery; however, her father remains in a coma with a traumatic brain injury. Georgie, Luke's ex-wife calls their son Edward in Thailand to come home. Edward is forced to face his family in crisis, while also trying to rebuild relationships after years of running away from the hurt and secrets. Georgie’s husband Joe represents Edward in the court case that ensues to decide who has the right to make a decision about whether to pull the life support and donate Luke’s organs, or to wait for a miracle.

As in many of Jodi Picoult's books, the story is told from multiple characters’ points of view. Through each family member's recounts of the past and present, we learn of secrets and regrets. What I found interesting was how Picoult compared the Warren family unit to the wolf pack. The whole notion that everyone, or wolf, has a job and a role to play, was beautifully interwoven throughout the story. I have always appreciated how Picoult forces me as a reader to look at situations from several angles, creating characters that need to be understood through their points of view. While I did not always agree with Cara’s beliefs, I could empathise with her desperate need to believe her father would survive.
Posted by Tara at 7:30 AM

Just wanted to say that you have a lovely webpage and beautiful and great stuff...