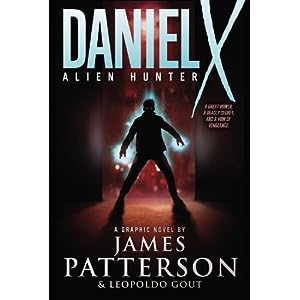 Daniel’s parents were murdered when a powerful alien in pursuit of The Book which ranks aliens by their power and abilities mercilessly attacks his family home. Orphaned at the age of three, with mystical powers that he must begin to udnerstand and learn to control Daniel eventually becomes an alien hunter who will seek revenge on the alien who murdered his family. He systematically begins killing the notorious aliens one by one. In this segment, Daniel is hunting Number 7, Ergent Seth. With his band of make believe friends and his supernatural abilities, Daniel faces and attempts to conquer evil.
My first graphic novel ever and I must admit I am a new convert to the graphic novel genre. I was pulled in right away and loved it! I couldn't put it down. Daniel is an alien hunter and for someone who isn’t a huge fan of Science Fiction, the format of a graphic novel works really well because I had some context to help me understand. James Patterson has found an excellent way to engage our reluctant readers.
Posted by Tara at 8:38 PM