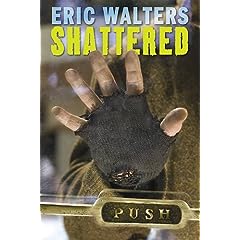 Eric Walters has created an incredible novel in Shattered. Ian Blackburn is a slacker, he leaves everything to the last minute and now he needs to complete 40 hours of community service to ensure passing his civics class or risk losing the new car his parents have promised him for passing his courses. He chooses to volunteer at The Club, which sounds like fun until he finds out it is a soup kitchen for the homeless. Ian is forced to face his many prejudices through a fascinating cast of characters including Mac who runs The Club, and Sarge a retired Spec. Ops. soldier in the Canadian Armed Forces. Shattered opens the readers' eyes to the plight of homeless, the difficulties faced by our Canadian soldiers when they return from Peace Keeping Missions and the horrors of genocide.

Shattered is a great book for teens and adults alike. Eric Walters makes the reader aware of many tough issues honestly. The book elicits incredible discussions and reflections. I liked that Ian Blackburn was an average teenager, he may have been rich and spoiled, but he wasn't troubled or angry. His development of character from apathy to curiosity and finally action was very believable. It is definitely a book I will return to with many different classes.
Posted by Tara at 9:20 PM